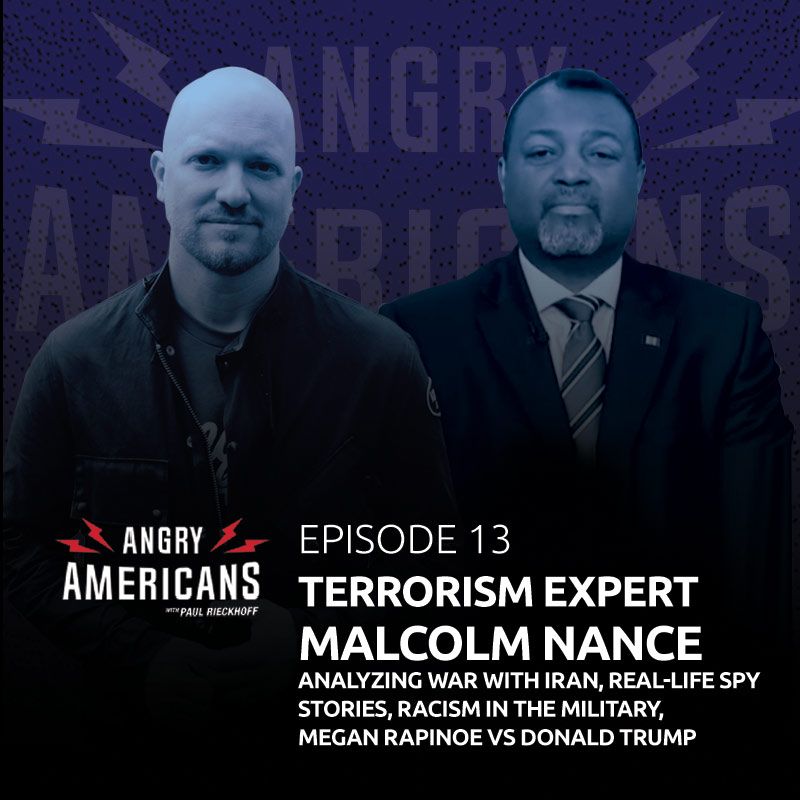 America is right now on the edge of war with Iran. And Angry Americans breaks down what you need to know. What would American military strikes against Iran mean? How would combat unfold? How many might die?

In his own unique and powerful style, Paul Rieckhoff (@PaulRieckhoff) dissects the issue that has the entire world on edge. The US Army Iraq war veteran examines the harrowing geopolitical game of chicken playing out on Donald Trump’s Twitter account, in the halls of Congress and around exploding oil tankers in the Gulf of Oman.

We go deep with gragarious cryptology and intelligence expert, Navy combat veteran, MSNBC terrorism analyst, and best-selling author, Malcolm Nance (@MalcolmNance). Before joining the Navy, Malcolm came from a family with generations of combat veterans and grew up in Philadelphia studying Spanish, French and Latin, and taking free classes in Russian and Chinese on weekends at a local high school. He served for 20 years in the clandestine world of top secret covert combat operations from Beirut to Libya to Iraq. He shares fascinating war and spy stories that sound like the stuff from the movies. One of the few African Americans to serve in his area of expertise, and one of the rare Americans to have already engaged in combat with the Iranians, Malcolm has a viewpoint like no other. He has also been an outspoken critic of Republican and Democrat leaders at the highest levels—and battled haters and partisans across American and in the Wild West of political Twitter.

Like all episodes, this show delivers the 4 I’s that define the Angry Americans podcast: integrity, information, impact and inspiration.

It’s the newest installment of the innovative political and social podcast that’s jump-starting conversation nationwide and has been featured on CNN, MSNBC, the Associated Press and Variety. Listen now and step into the fascinating and entertaining show that takes you behind the curtains of politics, media, war and activism at the highest levels.

This episode of Angry Americans is supported by our friends at Oscar Mike. Oscar Mike (@WeAreOscarMike) is the exclusive provider of the awesomely comfortable Angry Americans t-shirts worn by Paul Rieckhoff, Ron Perlman, Rachel Maddow and other recent guests and fans of the show worldwide.

And for behind-the-scenes videos from this episode and exclusive video content featuring Malcolm Nance, Rachel Maddow, Tom Collicio, Sarah Jessica Parker and other recent guests, visit AngryAmericans.us. If you’re not angry, you’re not paying attention. Angry Americans is connecting, uniting and empowering people of all backgrounds nationwide and is powered by Righteous Media. Join the movement now.