152. JW Cortés. A Bloody January For Law Enforcement. 30 Cops Shot in One Month. Inside the NYPD Officer Ambush. Police As a Political Chew Toy. Cops of Color in the Middle. Fatal Funnels, Punxsutawney Phil, Roger Waters & The Washington Commanders. 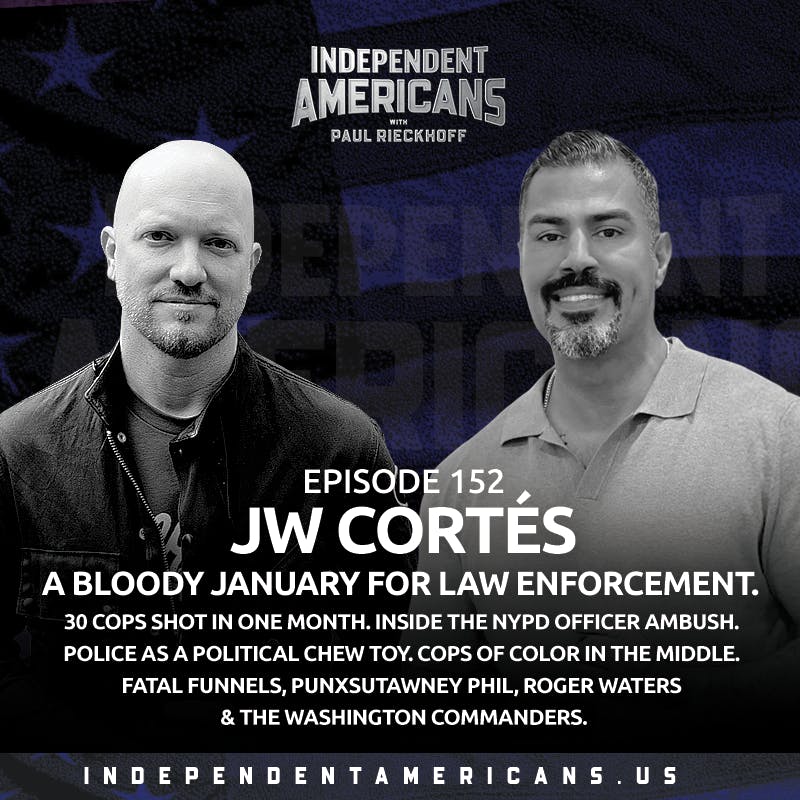 ​It was a very bloody January in America for law enforcement. At least 30 cops were shot nationwide. From California to Montana to NYC. It feels like Groundhog Day every day. And in 2022, police are the hottest political chew toy in America. A space previously reserved for troops and vets. In a powerful new #IndependentAmericans, we dig into it. Hard. With a guest who’s been on all sides of the issues. We look deeper, we look with experience, and we look for solutions. Beyond the partisanship and spin.No matter where you stand, or how you feel, it’ll help you #StayVigilant. And help you shoot straight.

Our guest is a leader to help us do it. He’s a guy who literally trains people to shoot straight.

JW CORTÉS (@JWCortes) is a combat veteran turned actor, singer, non-profit leader, cop and activist. Born in Brooklyn to Puerto Rican parents, he developed a keen interest in the arts and a strong desire to serve his community and country.

He’s a 17 year veteran of the NY State MTA Police Department. He is also a “Principled Policing” Instructor, Firearms Instructor, a Defensive Tactics Instructor and an Active Shooter Instructor. But he’s also much more. He’s an important, iconic and inspiring leader that’s shaping what America will be.

He was the first actor to portray the DC comic book character “Detective Carlos Alvarez” on FOX’s primetime hit series GOTHAM. He’s acted in a range of other roles on POWER, The Blacklist, Blue Bloods and the NBC reality series Stars Earn Stripes alongside the American Sniper Chris Kyle and most recently, a recent cameo in a Jennifer Lopez music video. And he joined country music superstar Kane Brown to sing on a remix of Kane’s hit record “Homesick.”

He was awarded the 2016 NFL Hispanic Heritage Leadership Award and was a celebrity spokesperson and ambassador and participated in the acclaimed HBO series “Habla Y Vota.” He addressed members of Congress to recruit their support to urge Hollywood to tell more accurate military/veterans stories, is the proud father of two sons, a lucky husband and loving owner of an American Bulldog named Blue. JW is a helper. He’s a hero. He’s a voice of reason. And he’s an independent American.

-Watch the full video of this conversation with Paul and JW here.

-Support the good work of The Detective Rafael Ramos Foundation.

-Also check out The Firefighters Podcast with Rob Serra

–And Uncle Montel – The OG of Weed