159. UKRAINE WAR REPORT. Rep Adam Kinzinger. America’s no-fly zone stiff-arm. Will Congress vote to declare war on Russia? US veterans join the fight. WTF is up with the MiGs to Poland? NOW will he leave the Republican Party? The new test of the AUMF. 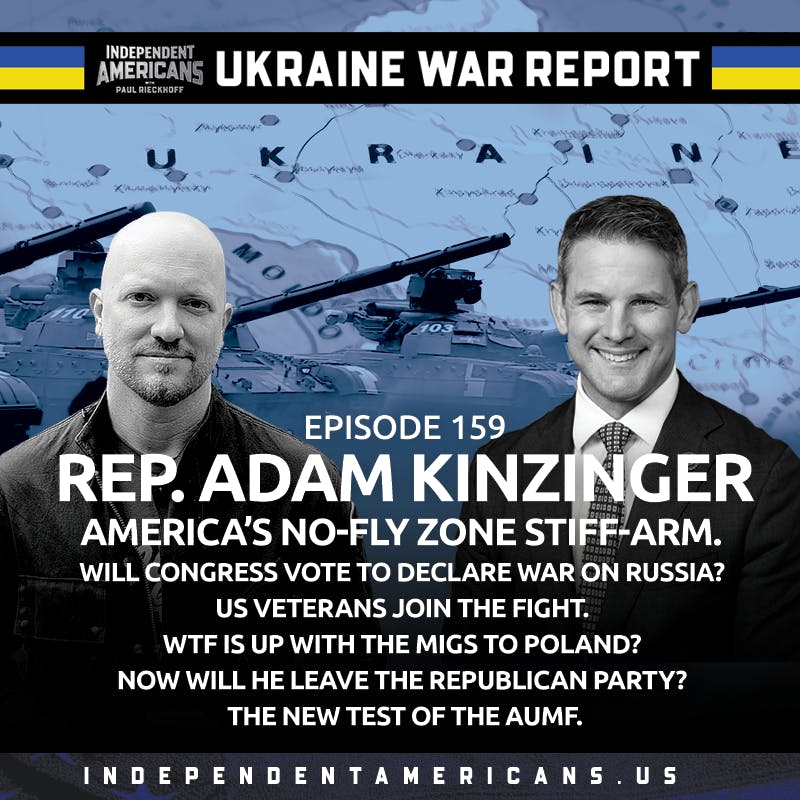 There are only hard choices left now. Not just for Ukraine. But for everyone who cares about freedom, liberty and humanity. President Zelensky and the people of #Ukraine are crying out for a no-fly zone. But the US government and NATO are giving them the stiff-arm. While Putin continues to slaughter civilians and commit war crimes.

The time for talk is over. And our guest in this episode is a man of action. A combat-tested pilot. A political dog fighter. And a political Maverick. He’s back. He’s Congressman Adam Kinzinger (@AdamKinzinger).

The 43-year-old Illinois Republican Congressman, Air Force combat veteran, political maverick, and fighter of the good fight is the man of this moment in American politics. He’s catapulted to the forefront of America’s consciousness in the last few months as one of only two republicans on the Select Committee to Investigate the January 6th Attack on the United States Capitol. He’s taking shots from all sides–and he’s fighting back. And he’s back for another no-holds-barred, fast-paced, no-BS conversation with Paul Rieckhoff (@PaulRieckhoff) about the latest out of Ukraine.

-Are we already at war with Russia?

-Will he vote to declare war on Russia?

-Why does he support a no-fly zone? What other options are there?

-Can Biden move fast enough to meet this threat? Can America? Is this the latest sign of American decline?

-American Vets are now in the fight. What will the Department of Defense do about them?

-Months later, is Afghanistan now Forgotistan? Will anyone ever be held accountable?

-WTF is up with the MiG fighter planes to Poland?

-NOW will he leave the Republican Party?

We’re flying hard and fast through all of it. And we’re keeping no rounds saved. It’s gut check time for America–and the world. Will we REALLY #StandWithUkraine️? Will America FIGHT alongside Ukraine? Download the new pod and find out.

Every episode of Independent Americans hosted by Paul Rieckhoff (@PaulRieckhoff) is pulled from the truth beyond the headlines–and offers light to contrast the heat of other politics and news shows. It’s independent content for the 42% of Americans that proudly call themselves independent. And delivers a shot of the Righteous Media 5 Is: independence, integrity, information, inspiration and impact. Always with a unique focus on national security, foreign affairs and military and veterans issues. This is another insightful pod to help you stay vigilant. Because vigilance is the price of democracy. In these trying times especially, Independent Americans will continue to be your trusted place for independent news, politics, inspiration and hope. Stay vigilant, America.

-Check out other Righteous podcasts like The Firefighters Podcast with Rob Serra, Uncle Montel – The OG of Weed and B Dorm.